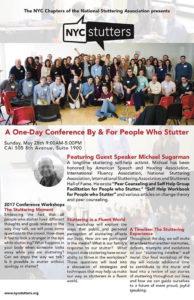 Big thanks to all who came out to our May meeting.  We had a great group with a ton a positive energy and lots to share.  Before we jump into the recap, one important announcement: NYC Chapters will be holding their annual conference on Sunday, May 28 (Memorial Day Weekend).  We are hard at work planning thought-provoking workshops which will hopefully inspire lots of great discussion.  If you haven’t already, please buy your tickets here: Eventbrite. And if costs are a concern, please select the financial hardship tab and come anyway.  We need as many of our members as possible to make this a truly memorable conference.

Onto the recap: After introductions, including by several first-timers and relative newcomers, one group member kicked us off by sharing an interesting experience that he has been having recently.  While maintaining eye contact through a stutter, he’s noticed that his vision will sometimes go blurry.  A couple other individuals in the group have had similar experiences, and others – rather than going blurry – shared that they often will close their eyes through a stutter.  Discussion ensued about the possible causes, including intense concentration and resistance to stuttering, along with some creative solutions, including pulling out from the block and breathing-related exercises.

This discussion transitioned into the difficulties many of us face when speaking with various authority figures, from bosses at work to police officers to bus drivers.  Most agreed that the often heightened anxiety of speaking with authority figures makes dealing with stuttering more difficult than usual.  One member shared that anytime he drives a car, he considers what would happen should he be pulled over for traffic violation.  Another member discussed about the perhaps surprising difficulty he experience with his boss: rather being impatient and dismissive, his boss is actually very patient and listens closely to what this member has to say.  This member shared that his boss’s tendency to hang on his every word, through sometimes stuttered speech, is actually quite unnerving.

Picking up from this conversation, another member opened up an interesting discussion regarding the often opposing challenges presented by scripted vs. unscripted speech.  One member shared about the common misconception applied to stutters that, if they had only prepared more, they wouldn’t stutter as much.  Many of us, it seems, find unscripted speech to actually be easier than scripted.  Others have had decidedly more mixed experiences, sometimes experiencing more ease with prepared remarks.  We shared a laugh when one first-timer noted, rather emphatically, that when he speaks off the cuff, rather than scripted, he always “nails it.”

The last topic of the night involved the anxiety that one member feels about reading at a friend’s upcoming wedding service.  As usual, the group had lots to say about this situation, some having been in similar situations themselves.  Advertising, or disclosing upfront to the audience about his stutter, was a common suggestion.  This member was concerned however that, in this formal setting, advertising would be inappropriate.  In response, one member shared that advertising is exactly what she did in a similar situation, and it worked well for her.  Nevertheless, this member is considering having a note included in the wedding pamphlet that he is a person who stutters, which would achieve the result of disclosing his stutter without the pressure of verbally disclosing it in the formal proceeding.  Lastly, an energetic new-comer suggested that this member read his assigned passage to the group.  Embracing the opportunity to practice in a supportive space, that member did just that.  And though uncomfortable at first, the member ultimately benefited from the experience and now feels better equipped to make the most of his experience at the wedding.

Last, but not least, we are saying goodbye to our long-time chapter leader Roisin McManus.  Roisin has been an influential chapter leader for the past 5 years here in Brooklyn.  Through her open and relatable yet determined style, she has inspired many a stutterer to feel just a little more free and accepting about the way we talk.  Though she is handing the NSA Brooklyn reins over to the remaining team of Chris, Bilal, Darren, and Emma, she will continue to do big things for our community as a whole.