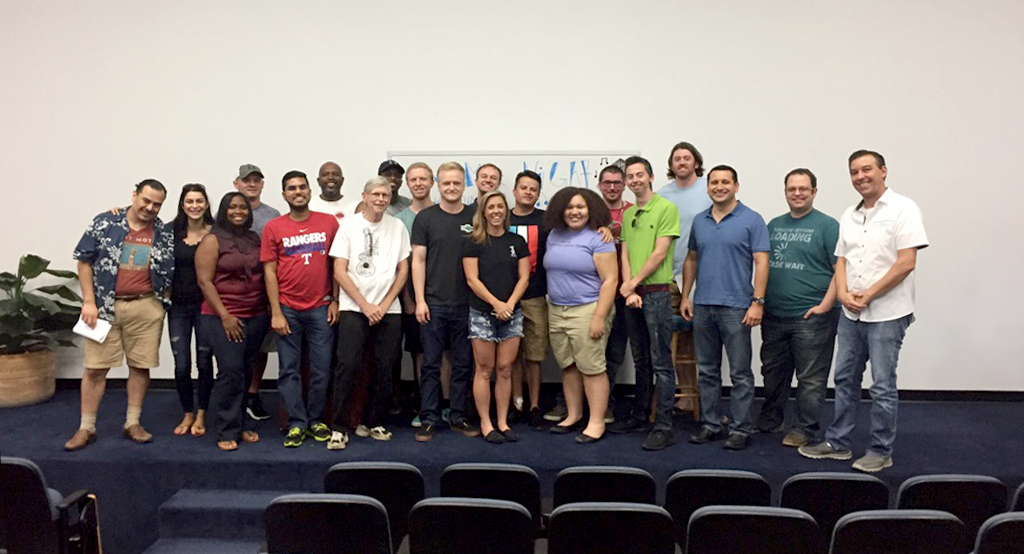 Last night the Dallas Chapter of the National Stuttering Association held it’s monthly meeting, and here’s a quick recap of what happened:

With 21 members in attendance including 3 first timers (Welcome to the family Misty, David, and Elias!), a friend visiting from H-Town (Hi Doug!), one from Connecticut (Alecia!), and a-friend-that-was-supposed-to-come-support-a-friend-but-the-friend-didn’t-show-up (Hi Angelo!), we were ready to get into our first “Open Mic” meeting!

But first things first: our ice breaker question of the night was “If you could could have someone else’s voice for a day, who would it be?”.  A favorite among the group was one of the most iconic voices of all time–and fellow PWS!– James Earl Jones, followed by Morgan Freeman, but we also had very fun responses like Owen Wilson, Mariah Carey and Barry White. One answer that stood out and seemed to hit a good note with the group was “I wouldn’t want to change my voice, because I have worked hard on liking the way I talk”— now that’s called acceptance!

After that, we had a few quick announcements that included:

– Thanks for making the Annual Conference such a success– Wasn’t it amazing?
– July Spotlight of the Month was the awesome Andrew Richards–Congratulations!
– Be on the lookout for the next month’s Chat n’ Chew email!

And with that, we moved on to our headliner… Dallas NSA’s “Open Mic Night”!

Every conference, “Open Mic” events prove to be one of the most popular and significant experiences, and with that in mind we were very excited to have our own.

We heard heart-warming revelations about overcoming fears, confessions of feeling so empowered after the conference to quit an unsatisfying job (we don’t necessarily encourage this, Josh… but congratulations!), stories of stuttering-related humor in the office, a couple stories about getting your name out (“rhymes with croissant!”, that’s a good one Prasanth!), an improvised but very well-crafted skit about Alecia’s stuttering journey, a piano solo (we happened to have a piano in the room!) by the talented and creative Tim, and a freestyle rap by Marcus. Wow! Who knew we had so much talent in one room?

Our “Open Mic” night proved without a doubt that stuttering doesn’t get in the way of telling a good story, or having impressive talents, but more importantly, we saw that doing things that you are scared of can be the beginning of an incredible and powerful journey. Nobody exemplified that idea better last night than Brett, who took the leap of standing on stage for the very first time to express his desire to become a motivational speaker in the future– that’s the transformational power of our chapter! No better way to close the night, right?

We thank you all for making this and every meeting such a powerful and uplifting experience!