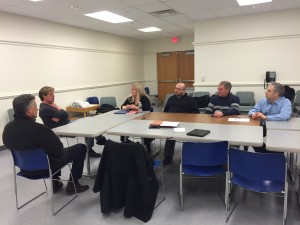 As you might now, five members of our chapter are participating in a theater play: Marissa, Mitch, Bill, Gary and myself.  Our producer and manager is Katherine Filer.  The play is being written specially for our group by Todd Cardin.  It will be a comedy and musical.  At this meeting we had a chance to meet Todd and Tom, his composer.  All of us, except Marissa, were there.

Todd was at the meeting for the first 45 minutes and told us about himself and how he works.  A few months ago Katherine interviewed each of us and recorded a video for Todd to see and get to know us.  He will create characters based on our personalities so that it is easier for us to portray them.  He will also write song lyrics that will fit into each scene.  For example, I asked him if I would have to disguise my Spanish accent and he said he’ll make it fit into the story somehow.  That could be the subject of one of the jokes.

I was concerned about the play being a comedy and having to deliver a line with precise timing. I am not good at telling jokes because I just destroy the punchline.  Todd said that the fact that is a comedy can be a good thing precisely in those moments.  He explained how comedy works and how to take advantage of the audience’s laughter.  The idea is that you let the audience laugh, which gives you time to compose yourself and then deliver your line as the laughter dies down.

Mitch suggested that although we don’t want the play to be about stuttering, it would be nice to have stuttering be a part of it without being intrusive.  Todd said that he can work it into the play in a good way. 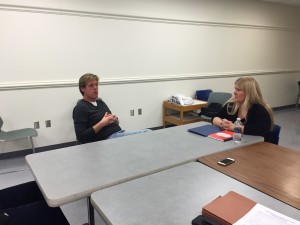 NSA in general.  He has enlisted a director and a song coach that will work with us.  They are all volunteering their own time and we are very thankful to them.

After Todd and Tom left we started our regular meeting.  We read the Welcoming words and checked in.  Katherine told us about the fire on the townhouse next to hers six weeks ago.  Her own house was damaged but no one was hurt.  We also spent some time talking about plans for the 30th anniversary celebration and about contacting local press to cover the event. 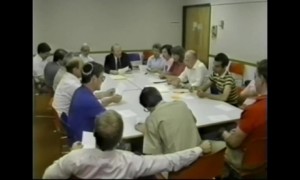 We were 5 people in attendance.  Bill Parry and his wife, Marilyn, Allan Cohen, Bill Collins and I.  This date was close to the actual 30th anniversary of the first chapter meeting and Bill shared some facts about that event (see separate article about the anniversary).

I read a page from the book “Setting My Words Free. Inspirational Messages for Adults Who Stutter” by Vince Markowsky.  “Day 14” talks about the difference between “stutterer” and “person who stutters”, the difference between something you are and something you happen to do.  We had a lot of things to say.  We all agreed that advertising helps because you take control of telling people that you are a person who happens to stutter.  Advertising helps you change how people view you.

Bill Parry and Allan are both speech language pathologists and they talked about different approaches they have used in treating people who stutter.

We also talked about the annual national conference and our different experiences.  Last year’s was my first conference and I have a lot great memories from it.  Bill Collins and I recall feeling overwhelmed physically and mentally, all the people we met, seeing families and children who stutter, the workshops and evening activities.