We had a great September Midtown NSA meeting with 25 people in total. This included 21 people who stutter (PWS), 3 speech language pathology (SLP) students, and one other person who came to lend support. Thanks to everyone who came out, and special thanks to the 1 first-timer who came (we hope to see you again at our next meeting)!  Afterwards, a bunch of us crossed the street and hung out for a bit at the bar, which is always a good time. I hope you enjoy our recap below:   🙂

As usual, the prevailing concept of advertising came up in one of our discussion groups, and the perspectives during the meeting seemed more varied than usual. One member explained how advertising wasn’t for him because he didn’t want people to feel bad for him. Another member talked about how his advertising has played a large role in setting him apart, showing determination and strength. Career-wise, he said that he even owes much of his success to his stuttering. Similarly, another member shared his story about how he hid his stuttering from most of his co-workers during his internship but finally advertised at the end of it during a presentation. He viewed it as a game-changer. And yet another member seemed convinced that controlling and managing his stuttering was the appropriate route for him.

Another discussion group talked about the idea of explaining in a cover letter for a job application that she is  a person who stutters. Different group members discussed their thoughts about this. Can this convey your uniqueness to the employer? Is it better to leave this out of the cover letter and then talk about it during the phone interview or as part of the in-person interview? Does mentioning our stuttering in a cover letter help us by speeding up the process of weeding out any employer who wouldn’t accept us as people who stutter? And wouldn’t this, in turn, de-stress the whole job-search process for us in the long run? The group touched upon these and other related questions, and ultimately decided that there is no perfect answer to this question. So much of this depends on the field in which you are applying for a position, your goals, etc.

Within this same conversation group, another member asked if stuttering should be considered a disability. This led to various members talking about the connotations brought up by the word “disability” itself. The conversation touched upon the idea that the word “disability” may be associated with negative feelings, but that also some people may be ok with, and might even embrace the concept of “disability”, and that we might consider the idea that all people are “disabled” in various ways, and that this is part of what makes us varied, interesting, and unique individuals. Again, there was no conclusive answer to this discussion, but it is clear that the relationship of stuttering to the word and concept “disability” is complicated, emotional, and at the very least allows for rich, thoughtful discussions about the NSA’s role both as a support group for people who stutter, and as a source of education for people who do not stutter.

Our other conversation group spoke about the experience of having a total “brain freeze” during the moment of stuttering, and how actually you can lose your train of thought- a frustrating but common phenomenon for many PWS. One member expressed interest in having an MRI measure brainwaves to determine what is actually happening when they go into that ‘block’. Other members expressed curiosity about this, and discussed if anything like this had been  studied before. Another member discussed an additional challenge: In addition to stuttering, he speaks another language, which also sometimes makes it challenging to express himself. However, the group agreed that he was a very articulate young man, and that he was on a trajectory of continued success. (He also had a very positive attitude!)
Announcements:

The new NSA Bronx Chapter needs your help!!!! Do you know of a venue in the Bronx area for the Bronx chapter to use as their meeting place? If so, reach out to us at nsamidtown@gmail.com and we’ll pass the message along to the new Bronx Chapter leaders 🙂

SLP student Informational Group: November 7th:       We have had a larger than average interest from SLP students in wanting to attend our monthly support groups. Since it is very important for our group to maintain the appropriate atmosphere during meetings, we often have to limit the number of SLPs and SLP students that join us. But in November we’ll be having an extra meeting for any members interested in some sort of combo between a support group and a panel to educate SLP students. Stay tuned for more details.

We’re starting to plan for an event in Central Park for International Stuttering Awareness Day (ISAD). The event will be on Sunday Oct 23rd. This will be a great way to get involved in the stuttering community in an exciting, empowering way. Look out for emails with more details about this in the near future.

Brooklyn group: The next Brooklyn chapter meeting will be Monday October 10th. Check out their site here for all info.

Getting involved: We’re always looking for new ways to continue to strengthen our growing stuttering community. Shoot us an email: midtownstutters@gmail.com with any ideas 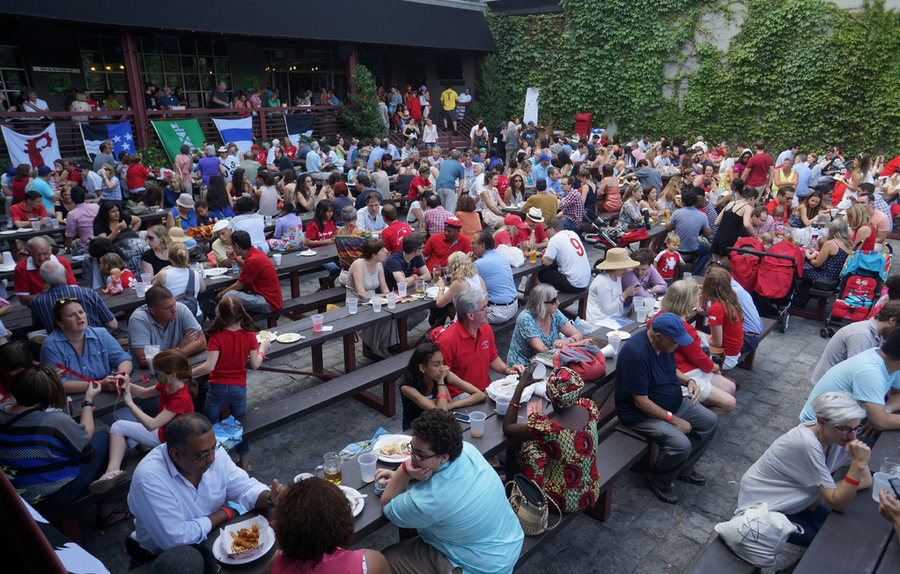 Hello NSA Midtown members,
We’d like to invite you all to our end of summer outing this upcoming Sunday afternoon (2pm-5pm) at Studio Square NYC, in Astoria, a quick 15min trip from Midtown Manhattan, and a not too bad of a trek for our Brooklyn crew.
With the continued pleasant weather coming up and the high interest expressed for an outing, we’re expecting a really nice turnout. Come join us for a beer or two, and some pub grub.
Here is the description from the Beer Garden’s website.

The Garden brings the spirit of an open-air, Bavarian beer garden into the modern era. Over 19,000 square feet of outdoor space with long communal picnic tables, river birch trees, ivy covered walls and cobblestone blocks create a green oasis amid the ever more sterile urban landscape.  Add in delicious food offerings from the Garden Cafe, an assortment of craft and major market beers, our Signature Sangria and six full bar stations…..